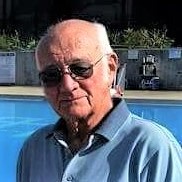 Joseph P. Shryock, age 90, of Chillicothe, passed away on Monday, May 10, 2021 at Bickford Senior Living in Peoria.

Joe was born on October 10, 1930 in Peoria to Arthur and Della (Reiferscheid) Shryock.  He married Nancie Mooney on May 4, 1957.  She preceded him in death on February 11, 2019.  Also preceding him in death are his parents; one sister, Terry Connolly; and one grandchild.

Joe served in the U.S. Air Force during the Korean War as a tail gunner on a B-29 and later as a senior gunner on a B-36, attaining the rank of Staff Sergeant.  He was a graduate of Spalding Institute and Bradley University obtaining two Bachelor’s degrees and a Master’s degree in Education, graduating with honors as a member of Phi Kappa Phi.

Joe spent a career in teaching seventh and eighth grade science in the Peoria School District while living and tending his farm outside of Chillicothe.  He enjoyed flying and obtained his pilot’s license in 1987.

Cremation rites will be accorded and a Memorial Mass will be held at his church, St. Edward Catholic Church on Saturday, June 12, 2021 at 11am, with visitation held one hour prior to Mass at the church.  Burial of ashes will be at St. Joseph’s Cemetery in Rome at a later date.  Memorials in Joe’s name may be made to the church.  Arrangements are under the care of Weber-Hurd Funeral Home in Chillicothe.  Online condolences may be made through www.weberhurdfuneralhome.com

To send flowers to the family or plant a tree in memory of Joseph P. Shryock, please visit our floral store.

To send flowers to the family in memory of Joseph Shryock, please visit our flower store.