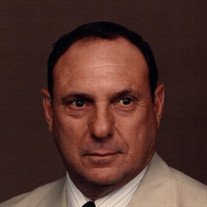 Joe was born in Peoria, IL to Isadore and Vera (Cohen) Marks on July 19, 1932. He is survived by his two daughters, Barb (Butch) Rummerfield of Sparland and Lynne (David) Granger of Normal, IL; two grandchildren, Andy (Liz) Arnold of Downer's Grove and Stacie (Chad) Breedlove of Bartonville; three great-grandchildren, Beau, Britlyn and Griffin and one great-grandchild on the way. Also surviving are his brother, Arnold (Nancy) Marks and his sister, Harriette Gumm.

Joe married Nita Norene Boswell on June 19, 1955. They were together 45 years, until her death in 2000. Also preceding him in death are his parents and two sisters.

Joe worked for 32 years at Illinois Furniture Company in Peoria. He also worked for Lou Carney and Fredman Brothers selling furniture.
Joe was a Navy veteran for 67 years, serving during the Korean War. He was very proud of this time in his life and talked often of his time aboard the USS Epperson and USS Henderson as a sonarman. Joe was a 66-year member of the American Legion Post #2 in Peoria.

Joe lived in Pinewood Estates in Chillicothe for 47 years and was called the "Mayor of Pinewood" by all his friends and neighbors. He loved spending time with his grandchildren and helping people in need. He entertained everyone by playing his ukulele and harmonica. Joe also loved sitting on the front porch swing and visiting with his neighbors.

Services will be held on Monday, March 9, 2020 at 1:30pm at Weber-Hurd Funeral Home in Chillicothe. Visitation will be held one hour prior to the service at the funeral home. Interment with military honors will be at Swan Lake Memory Gardens following the services. In lieu of flowers, memorials may be made to St. Jude Children's Research Hospital or the American Diabetes Association.


To send flowers to the family or plant a tree in memory of Joseph Aaron Marks, please visit our floral store.

To send flowers to the family in memory of Joseph Marks, please visit our flower store.