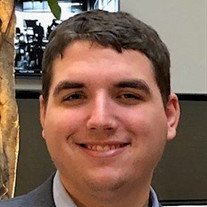 Jonathan R. Denzer of Shakopee, MN, formerly of Chillicothe, passed away on April 24.  He was 27 years old.  He was born on February 21, 1992 in Peoria to Mike and Carol Denzer. Surviving are his parents and his brothers Eric (Columbus, OH) and Greg (Austin, TX).  Also surviving are his grandparents, Connie and Donna Denzer and Bob and Marge Wold. Jon was loved by his aunts and uncles; Cheryl and Ed Hoff, Bob Wold, Jr., Pat and Lisa Denzer, Terry and Teresa Denzer, Tim and Kelly Denzer, Karen Denzer, Susan and Cesar Rodriguez and Mark and Jenny Denzer.  He is also survived by twelve cousins whom he adored, protected and teased.  Jon was preceded in death by his cousin Lukas.  He also leaves behind his loyal dog, Echo. Jon graduated from IVC High School in Chillicothe in 2010 and was a proud 2014 Michigan State University graduate.  He worked for Cambria Countertops in Belle Plaine, MN where he helped solve customer concerns.  Jon was a kind, generous and thoughtful young man.  He had an engaging personality and was equally at ease playing with the countless kids who flocked to him or having a conversation with someone twice his age.  He loved sports.  He passionately followed the Minnesota Twins, NY Jets and the MSU Spartans and had an amazing ability to recall random sports details.   Jon loved and admired his older brothers.  They were great role models and helped Jon become the amazing person we all continue to love. His mom loved Jon's big bear hugs.  When he wrapped her in his arms she felt safe and protected.  He was taken way too early and will be dearly missed. A visitation will be held on Thursday, May 2 from 4 pm - 7 pm at Weber Hurd Funeral Home in Chillicothe.  Jon's funeral mass will be Friday, May 3 at 11 am at St. Edward Catholic Church in Chillicothe.  Cremation rites will be accorded following the funeral. Weber Hurd Funeral Home in Chillicothe is assisting the family. Memorial contributions may be made to Crossword Cafe in Chillicothe or The Epilepsy Foundation of Minnesota.

To send flowers to the family or plant a tree in memory of Jonathan R. Denzer, please visit our floral store.

To send flowers to the family in memory of Jonathan Denzer, please visit our flower store.