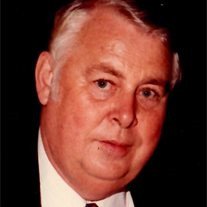 John L. Gray, Jr., age 91, of Chillicothe, passed away on Wednesday, January 23, 2019 at the Illinois Veterans Home in LaSalle. John was born on August 2, 1927 in Chillicothe to John Lee and Elva M. (Hargardine) Gray.  He married Barbara Worthington on November 2, 1984 in Chillicothe.  Surviving are his wife, Barbara; his step-daughter, Deborah (Clay) Layne of Peoria, IL; his sister-in-laws and many nieces and nephews.  He was preceded in death by his parents; four siblings, Wallace, Alfred "Tote" and Harley Gray and Judith Secrest; his sister-in-law, Rosie Gray; and his niece, Mary Lee Secrest. John served in the U.S. Army.  In 1957 he opened Gray Auto Parts and worked there into his late 70's.  John was a member of First United Methodist Church in Chillicothe, a charter member of the Chillicothe Rotary, 50 year member of the Masonic Lodge, life-member of Sportsman Club and was a 50 year member of the VFW. John loved hobbies and had a variety of interests.  He raised birds and rabbits, was an avid gardener and even made his own wine and beer.  John was a Ham Radio and CB Radio operator and his handle was "The Bird Man."  John enjoyed woodcarving, traveling and dining out with family and friends. Services will be held on Tuesday, January 29, 2019 at 11am at Weber-Hurd Funeral Home in Chillicothe.  Rev. Edward Dutton.  Visitation will begin at 9:30am on Tuesday at the funeral home with Masonic Rites beginning at 10:45am.  Burial will be at Chillicothe City Cemetery with military honors.  Memorials may be made to the IL Veterans Home, 1015 O'Conor Ave., LaSalle, IL 61301.

To send flowers to the family or plant a tree in memory of John L. Gray,, please visit our floral store.

To send flowers to the family in memory of John Gray,, please visit our flower store.