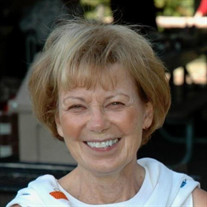 JoAnn Cudworth Randolph passed away June 12, 2020 at Heritage Health Nursing Home in Chillicothe, IL. She was 83 and was born on May 10, 1937 in Harrisburg, Pennsylvania to Herschel and Bertha (Baker) Cudworth. Both parents preceded her in death.

She married Robert M. Randolph on September 5, 1959 in Lincoln, IL. She is survived by her husband Robert, Chillicothe, IL and 3 children and 9 grandchildren. Her children are Dr. Gregory M. Randolph, DDS, (Joanne) Bloomington IL, Dr. Bradley A. Randolph DDS, (Jan) Ft. Madison, IA and Jeffery P. Randolph, (Missy) Peoria, IL. Her nine grandchildren are Blake, Kee and Meado, all from Bloomington, IL, Ali, Kassi and Natalie all from Ft. Madison, IA and Lauren, Celia and Niko, all from Peoria, IL. JoAnn has two younger sisters, Kay Oppenheim (Howard) of Birmingham, AL and Shirley Cudworth, who preceded her in death.

JoAnn loved and cherished her family and she hosted many family events over the years, and in particular her annual Christmas Day dinner and celebration with her family. She also hosted many family Birthday celebrations, which she loved to do. She along with her husband hosted the Rotary Club of Peoria North annual fish fry in September of each year at their residence for at least 15 years. She was very proud to be named a Paul Harris Fellow by the Club due to her service efforts and generosity. One of her very special loves was hosting various students who were visiting the USA during the summers, either on work assignments or attending Bradley University from Europe. She served several offices in the Peoria Friends of Friedrichshafen and served as its President for 2 years. As part of that responsibility, she and her husband visited Europe and Friedrichshafen, Germany on twelve separate occasions annually over a number of years. Only on one of those trips which was primarily to Spain, that they did not visit Friedrichshafen, Germany. On many of those trips they stayed at the homes of German parents whose children had stayed with us during their visit to the USA.

JoAnn instilled the great value of education to her family and friends, returning to college to complete her Bachelor's degree at the age of 57, while working full time. She started part time work in word processing at Illinois Central College in the early 1970's. After a period of time she started working full time in the administration department. When Dr. Leon Perley became President she was advanced to Secretary to the President. She was then retained by Dr. Tom Thomas as his Secretary and also as Secretary to the Board of Trustees at Illinois Central College. She attended ICC Board meetings and kept minutes during that period. She was then called back to assist after her retirement to help with the information department at the new Peoria Campus of Illinois Central College. She worked in many positions at ICC for nearly 35 years in total and became one of its most knowledgeable individuals.

She is a member of the First United Methodist Church in Peoria, IL having joined in 1965.

A public visitation will be held on Saturday, June 20, 2020 from 9am to 11am at Weber-Hurd Funeral Home in Chillicothe. A graveside service will also be held on Saturday at 2pm at the Randolph Cemetery in Kenney, IL. In lieu of flowers, memorials can be made in her name to: Illinois Central College Foundation; First United Methodist Church, Peoria, IL; The Peoria Friends of Friedrichshafen, Rotary Club of Peoria North Foundation, Heritage Health, Chillicothe, IL or the Randolph Cemetery Park, Inc. Online condolences may be made through www.hurdfamilyfunerals.com

To send flowers to the family or plant a tree in memory of JoAnn C. Randolph, please visit our floral store.

Please click here to view the video tribute
To send flowers to the family in memory of JoAnn Randolph, please visit our flower store.