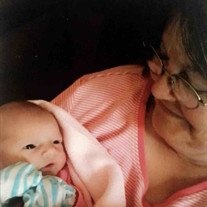 Joann Janson, age 56, of Creve Coeur, passed away on Tuesday, October 10, 2017 at Heartland Health Care Center in Canton. She was born to the late Charles and Ruth (Way) Underwood on October 10, 1961 in Peoria. She married Steven Wayne Janson, and he preceded her in death on September 16, 2008. Joann was also preceded in death by her sisters Monica Underwood and Sandra Hendricks, and an infant son. She is survived by her son, Billy Joe (Abby) Janson of St. David; one granddaughter, Hope Janson of St. David; two brothers, Terry Underwood of Peoria Heights and Jerry Underwood of Peoria; and numerous nieces, nephews, great nieces, and great nephews. A funeral service for Joann will be held at 11:00 AM on Saturday, October 14, 2017 at Cumerford-Hurd Funeral Home in Peoria. Rev. Ray Harrison will officiate. Visitation will be held one hour prior at the funeral home. Burial will be held at Springdale Cemetery. Memorial donations in honor of Joann may be made to any charity of the donor's choice. Joann's online memorial website may be viewed at www.cumerford.com

To send flowers to the family or plant a tree in memory of Joann Janson, please visit our floral store.

To send flowers to the family in memory of Joann Janson, please visit our flower store.