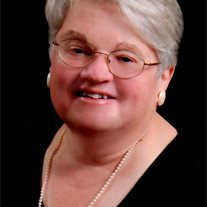 Joan M. Wagner, 65, of Chillicothe passed away on Friday, October 6, 2017 at Richard L. Owens Hospice Home in Peoria. She was born on October 7, 1951 in Beardstown, the daughter of Homer O.W. and Julia M. (Dotzert) Korte. She married John E. Wagner on April 20, 1985 in Beardstown at the First Ev. Lutheran Church. Surviving are: her husband John; sister, Carolyn L. (Fred) Lauder; brother, Norman H. (Melissa) Korte; several nephews; a niece; father and mother in-law, John C. and Kay Wagner; and brother-in-law, James (Rita) Wagner. She was preceded in death by her parents, one brother, Arthur W. Korte, uncles, aunts and cousins. Prior to her marriage, Joan graduated from Beardstown High School in 1969, then graduated from Gem City Business College in Quincy with a Business Administration Associate's Degree in December 1970. She was first employed at Fred I. Cline Co. from 1971 to 1974 (Furniture and Funeral Home business) in Beardstown. Then she was employed at Bluff Springs Farmers Elevator Co. from 1974 to 1985 in Bluff Springs. She also was the treasurer and trustee for the Jockisch Cemetery Trust Fund from 1983 to 2010. She was a member of St. John's Ev. Lutheran Church in Bluff Springs, then after marriage was a member of First Presbyterian Church of Princeville and was currently a member of the First United Methodist Church in Chillicothe. She enjoyed her family and friends, traveling, collecting, and family genealogy. Joan had a special ability to help others by sharing with them her own life experiences. She was a lady of dignity and strength, and she was a caring, wonderful friend. "The things you do for yourself are gone when you are gone, but the things you do for others remain as your legacy." What will your legacy be? Funeral service for Joan will be held in Bluff Springs on Wednesday, October 11, 2017 at 11:00 am at the St. John's Ev. Lutheran Church in Bluff Springs. Visitation will be held on Tuesday evening from 5-7:00 pm at Weber-Hurd Funeral Home, Chillicothe and also one hour prior to the funeral service in Bluff Springs. Burial will be in the Jockisch Cemetery near Bluff Springs. Memorials may be made to the Jockisch Cemetery Operating Fund, Roger Hendricker, 13162 E. Bethel Church Road, Arenzille, IL 62611. Joan's online website may be viewed at www.weberhurdfuneralhome.com

To send flowers to the family or plant a tree in memory of Joan Wagner, please visit our floral store.

To send flowers to the family in memory of Joan Wagner, please visit our flower store.