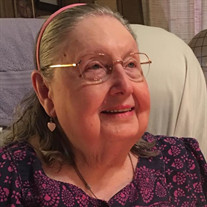 Joan was born on December 28, 1930 in Pontiac, IL to Frank Harold and Fern Almeda Jane (Webber) Reed. She married James Milton Brown on November 19, 1950 in Pontiac, IL. He preceded her in death on September 12, 2006. Also preceding her in death are her parents; one son-in-law, Carl Reavley; one grandson, Bradley Lutrell.

Surviving are her daughters, Melanie (Randal) Reed, Stephanie Reavley and Valerie (Matthew) Reny all of Chillicothe, IL; 10 grandchildren; eight great-grandchildren; her sister, Janet Metz of Pontiac, IL; and many nieces and nephews.

Joan attended Reed Central Grade School and graduated from Pontiac Township High School. She played the French horn and trumpet in her high school band as well as playing the piano and the organ. Joan and Jim passed their love of music on to their children and grandchildren.
Before being a stay at home mom and raising her children, Joan was a legal secretary and was the secretary to the administrator at St. Mary's Hospital in Streator. She enjoyed sewing, calligraphy, baking, keeping up on current events and doing crossword puzzles. She was a member of Chillicothe First United Methodist Church, joining Christmas Eve 1966, where she served as an usher and greeter along with husband Jim for many years.


To send flowers to the family or plant a tree in memory of Joan D. Brown, please visit our floral store.

Please click here to view the video tribute
To send flowers to the family in memory of Joan Brown, please visit our flower store.