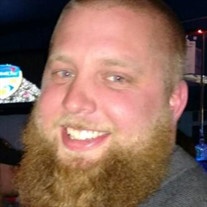 Jeremy was born on May 15, 1989 in Peoria, IL to Gerry D. Brown and Jona E. Babington. He graduated from IVC High School and attended Illinois Central College. Jeremy was a truck driver for Lynch Aluminum Manufacturing Company in Peoria.

Surviving are his mother, Jona Babington of Chillicothe; his father, Gerry (Patti) Brown of Pekin; his twin sister, Jamie L. Brown of Morton; his stepbrother, Robb (Leah) Spear; his aunt, Julie (Mike) Spears of Peoria; his uncles, Bob Brown, Chip (Kay) Brown, Charlie (Teresa) Brown and Ed Brown; and many cousins, nieces, nephews and a long list of many special friends. He was preceded in death by his grandparents; two uncles, John Babington and Garry Brown; and one aunt, Judy Freeman.

Jeremy's motto was, "Live Free Ride Hard." His love of motorcycles was shown in his advocacy for Bikers for TaTas. He was also a member of the A.B.A.T.E. and the Valley Lakes Country Club and enjoyed playing softball with his best friends. His big bearded smile and laugh were contagious and had a way of lighting up the room. He had a big heart and was always willing to help anyone who needed it. He was admired, respected and was the epitome of who and what a man should be. Jeremy was a beacon of love, loyalty and positivity for his family, friends and even strangers. He was always the life of the party and left a legacy that will be greatly missed and matched by none.

Cremation rites will be accorded and Jeremy's "Last Ride" will be organized and held at a later date. Memorials in his name may be made to Biker for TaTas, www.bftt.org. Arrangements are under the care of Weber-Hurd Funeral Home in Chillicothe.

To send flowers to the family or plant a tree in memory of Jeremy A. Brown, please visit our floral store.

To send flowers to the family in memory of Jeremy Brown, please visit our flower store.