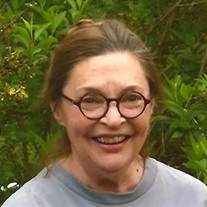 Janet S. Giugler, 69, of Normal passed away on Tuesday, April 12, 2016 at Loyola University Medical Center in Chicago.
Janet was born September 22, 1946 in Moline, Illinois to Walter F. and Lorraine (Smith) Giugler.
Surviving are: one daughter, Lilja Agness of Appleton, WI; one son, Zach Agness of Appleton, WI; two grandchildren, Eloy and Ruby Vasquez, both of Appleton, WI; one brother, Larry (Mary) Giugler, of Sparland; two sisters, Nanette (Kevin) Grindstaff of Decatur, and Sally (Alan) Goeke of Burr Ridge; her mother, Lorraine Giugler, of Chillicothe;one niece, Alysa Goeke of Burr Ridge; five nephews, Michael and Brian Giugler of Sparland; Ian and Cole Grindstaff of Decatur; Evan Goeke. Of Burr Ridge, and her long time friend and loving companion, David Dellinger of Normal. She was preceded in death by her father.
Janet had a Bachelors Degree from Illinois State University in Art Education and many graduate credits from Rhode Island School of design, Southern Connecticut University, University of Houston, and ICC in East Peoria. most recently Janet taught Fiber Arts in the historic district in Bloomington in her studio, The Loft. She loved spending time with family and friends often visiting museums, taking long walks in the woods, or just baking an awesome apple pie. Janet was an amazing personality and will be missed dearly.
Cremation rites have been accorded and a Celebration of Life will be held on Sunday, May 1, 2016 at 1:00 pm at the Shore Acres Clubhouse in Chillicothe. Memorials may be made to Appleton Wisconsin school district art fund. Burial will be held in private with family
Janet's online memorial website may be viewed at www.weberhurdfuneralhome.com


To send flowers to the family or plant a tree in memory of Janet S. Giugler, please visit our floral store.

To send flowers to the family in memory of Janet Giugler, please visit our flower store.