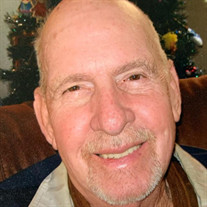 Jim was born on December 9, 1937 in Peoria, Illinois to John Albert and Venora Rose (Estes) Volk. He married Miranda Snyder on November 10, 1994 in Maui, Hawaii.

Surviving are his wife, Miranda; his daughters, Stephanie Snyder of Henderson, NV and Angela Cerny of Oswego, IL; seven grandchildren, Miranda (Nate) Cerny Behrens, Jake Cerny, Zachary Cerny, Allison Cerny, Cole Segovia, Josephine Snyder and Scarlett Snyder; and his brother, Robert (Holly) Volk of Chillicothe, IL. He was preceded in death by his parents; his son, James Snyder; and his brother, Martin Volk.
Jim served in the U.S. Navy and then worked for the Teamsters for 36 years before he retired. He was a member of the Peoria Casting Club and the Rusty Zipper Coffee Club. He enjoyed boating, RV traveling, and raising his quarter horses.

He lit up every room he walked into. Your smile and sense of humor were infectious. You will be missed dearly.

Cremation rites will be accorded and a celebration of life will be held at a later date. Arrangements are under the care of Weber-Hurd Funeral Home in Chillicothe.

To send flowers to the family or plant a tree in memory of James A. Volk, please visit our floral store.

To send flowers to the family in memory of James Volk, please visit our flower store.