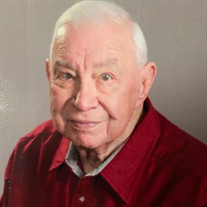 James "Jim" C. Thornton passed away early on Saturday morning, January 16, 2021 at his home in Chillicothe.
Jim was born on September 22, 1932 in Blytheville, AR. To Fred and Alice (McClain) Thornton. He married Rita A. Londrigan on June 4, 1955. After her death, he married Judi M. Sefried-Campbell on December 1, 2010.
Surviving by his children Jim (Lori) Thornton of Chillicothe and Kim Beaumont of Chillicothe; four grandchildren and seven great grandchildren.
Jim served in the US Army.
He graduated from Western Illinois University where he received his Bachelors of Science in Education. He later attended Bradley University where he received his Masters of Educational Administration.
Jim started his teaching career in Auburn, IL. Where he was also a 50 year member of the Auburn Ark & Anchor Masonic Lodge #354.
He began teaching and coaching basketball at Illinois Valley Central High School in 1961. In 1969, he started in school administration, as the Assistant Superintendent of the school district and in 1984 became Superintendent until he retired in 1989.
After retiring from the school district, he was appointed as the Executive director of the Public Building Commission in Peoria until 2015.
He served the City of Chillicothe as Second Ward Alderman from 2003 until 2009 and again from 2014 until 2019.
He was a Charter Member and Board Member of Pearce Community Center. He was a member of Chillicothe First United Methodist Church.
Private graveside services and burial will be at the Chillicothe City Cemetery on Tuesday, Jan. 19, 2021. Rev. Ron Martz will officiate. In lieu of flowers, memorials may be made to the Chillicothe Community Needs Agency or Pearce Community Center. A celebration of Jim's life with friends and family will be held at a later date. Weber-Hurd Funeral Home is in charge of arrangements. Online condolences may be made to the family at www.weberhurdfuneralhome.com

To send flowers to the family or plant a tree in memory of James C. Thornton, please visit our floral store.

To send flowers to the family in memory of James Thornton, please visit our flower store.