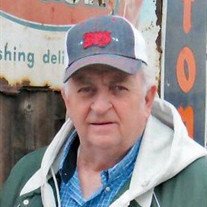 James Allen Richardson, 79, passed away peacefully surrounded by his family on January 4, 2019. Jim was born on May 29th, 1939 in Chillicothe. Jim's life was not about finding himself, it was about creating himself.   Growing up he was known to get into a bit of mischief with neighborhood friends like Pat Coogan and Speed Taylor. After graduating high school he would serve our country proudly within the US Army's 24th Infantry division in England and Germany from 1961 to 1963. He would often talk about those experiences and friendships made during this time of his life. After returning from his military service, his longest and most loving relationship would begin in 1968 with Karen Sue Kellenberger. Jim and Karen made a great pair and loved life together with over 49 years of marriage. Jim and Karen would raise 2 sons Gary and Scott who they instilled in them a sense of purpose. Jim would work for Caterpillar for 30 years retiring as a line inspector in 1993. He would often say he was only one of a select few people who enjoyed retirement almost as long when he was employed. Even after retiring, he would find new adventures like tinkering with his 1950 Ford, driving a school bus for IVC students and traveling across the country with Karen visiting places special to them both. He cherished his Chillicothe home of more than 46 years which gave him much joy and an excuse to buy every tool, drill bit and "how to magazine" ever made. He was a true jack-of-all trades and would often be found fixing things in his home or yours. Jim also enjoyed old westerns and woodworking. There wasn't a week that would go by that he wasn't rooting on the Chicago Cubs or Bears and following the NASCAR circuit. Jim left us too early, however, friends and family knew him as someone who they could always count and depend on. He was truly the rock of the family. Jim is survived by his wife, Karen; sons, Gary Smith (Jen Shaffer) and Scott; sister, Sandra (Ralph) Murphy. Jim was preceded in death by his father and mother, Leo and Reba; brothers, Jack and Bill Donath. In lieu of flowers, the family asks to give to St. Jude. A private memorial service for immediate family is pending.

To send flowers to the family or plant a tree in memory of James A. "Jim" Richardson, please visit our floral store.

To send flowers to the family in memory of James Richardson, please visit our flower store.