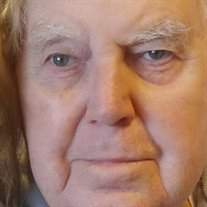 Surviving are his wife, Mary; his children, Michael McNamara of Toluca, IL, Dennis (Tracey) McNamara of Lacon, IL, Lynn (Michael Cerny) McNamara of Roseburg, OR, and Jayme (Benjamin) Bradshaw of Pontiac, IL; nine grandchildren; eight great-grandchildren; and his in-laws and two nephews who he was very close to. He was preceded in death by his parents and his siblings, Edna, George, Elizabeth "Babe" and Theresa.

Jim was a steel worker, working for the steel mill in Lemont, IL and later for the Teamsters until he retired in 1998.

A private service and entombment will be held on Friday, January 29, 2021 at Resurrection Mausoleum in Peoria. Arrangements are under the care of Weber-Hurd Funeral Home in Chillicothe.

To send flowers to the family or plant a tree in memory of James H. McNamara, please visit our floral store.

To send flowers to the family in memory of James McNamara, please visit our flower store.