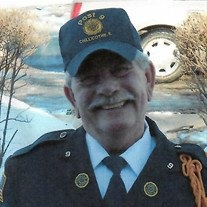 Jackie "Jack" L. Feltmeyer, age 68 of Chillicothe died on Saturday, February 6, 2016 at 12:44 AM at UnityPoint Methodist Hospital in Peoria.
Jack was born on December 9, 1947 in Peoria, IL. He was the son of Donald L. and Maggie J. (Coman) Feltmeyer.
Jack is survived by his mother, Maggie J. Feltmeyer of South Pekin; his daughter, Angela M. (Nathan) Hood of South Pekin; grandchildren, Carter lane, McCayla Hood and Madaleyna Hood all of South Pekin; two sisters, Donna (Ron) Hawkins of of South Pekin and Linda (Scott) Shreffler of Pekin; and his Fiancée, Ann Turpen of Chillicothe. He is preceded in death by his father.
Jack was a US Air Force Veteran serving during the Vietnam War. He was active in the Chillicothe American Legion Post 9, Chillicothe VFW Post 4999 and the Chillicothe AMVETS.
After serving in the military Jack worked for Caterpillar, Inc. at the Tech Center in Mossville for 30 years retiring in 1996. He was a member of the UAW 974.
Jack was a member of the Grandview Masonic Lodge 1112 AF & AM, Scottish Rite Valley of Peoria, and the Mohammed Shriners of Peoria, AAONMS, where he was a member of the Drill Patrol and EL Hajj Caravanerai #6.
Jack liked to be outdoors, hunting and gardening, he liked doing crossword puzzles, and lately he had been woodworking, making toys, trains, tables and other projects.
Jack's wish was to be cremated. Friends and family are invited to a visitation on Wednesday, February 10, 2016 at Weber-Hurd Funeral Home in Chillicothe from 9-11:00 AM. A Masonic Service will be conducted by his lodge at 11:00 AM at the funeral home and Military Rites will be held at the Chillicothe Veterans Memorial at 11:30 AM. Memorials may be made to Chillicothe Veterans Memorial or Shriner's Hospital Committee.
Jack's memorial website may be viewed at www.weberhurdfuneralhome.com


To send flowers to the family or plant a tree in memory of Jackie L Feltmeyer, please visit our floral store.

To send flowers to the family in memory of Jackie Feltmeyer, please visit our flower store.