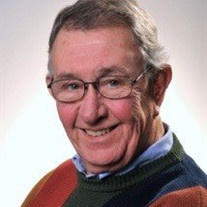 Jack F. Russell, 75 of Chillicothe passed away Monday, September 24, 2018 at Unity Point Methodist Medical Center in Peoria, IL. He was born May 31, 1943 in Peoria, IL to Carlton and Helen (Olson) Russell. Jack married Bonnie Embry in Peoria on May 17, 1969. Jack was preceded in death by his son, Craig, and his parents. Surviving are his wife, Bonnie; son, Michael (Marsha) and grandson Connor, and son, Fred (Shari) and grandchildren Derek, Kristin and Shawn. Jack is also survived by his sister Jane and brother Jim. Jack graduated from the University of Montana in 1965 after which he proudly served his country in the US Army during Viet Nam conflict. He spent time with the 82nd Airborne; and then with the 1st Brigade, 101st Airborne Division in Viet Nam. Jack's business career started in 1969 with the Sheraton Cadillac Hotel, Detroit, MI as Industrial Sales Manager. In 1971 he and family moved to Louisville, KY where he joined Kentucky Fried Chicken. In 1972 KFC moved Jack to the Los Angeles area and to San Diego in 1973. After a temporary Hong Kong assignment in 1974, KFC moved them to the KFC operation in London, in 1975 where Jack worked both in England and on the continent. In August, 1981 the family moved to the San Francisco area when Jack was the company's liaison with area franchisees. In November 1982, Jack and Bonnie moved to Chillicothe when they bought the KFC franchise in the Peoria area. After seven moves in 13 years they stayed put for the next 36 years. In September of 1997 they sold the franchise and Jack went to Bradley University as Executive Director of the Theresa Falcon Executive MBA program, retiring in June 2012. During his time at Bradley, Jack became certified as a Life Coach, focusing on business executives and continued in that calling for the next 18 years -- walking with people as they became the best that they could be. At various times he and his loving partner in life, Bonnie, skied the Rockies and the Austrian alps, gambled in Macau, fox hunted in England's Cotswolds, rode with the Berbers across the deserts of Morocco and the next year through the wine regions of Bordeaux, sampling as they went. For Bonnie's 50th birthday they participated in a roundup of a thousand head of cattle on 30,000 acres in the southwest mountains of Montana. Jack loved to fly fish and walked the streams of several western states and Canada. He had fond memories of fly fishing Montana's Gallatin River on Christmas Eve Day standing in 35-degree water. To understand the people of a country, Jack believed one must eat their food. He enjoyed experiencing all different kinds of food from the food stalls of Kuala Lumpur and Shanghai to having Eel Pie with Slimy Green over mashed potatoes deep in the heart of London's East End. Jack also believed that where people gather and enjoy a meal, there is happiness. Jack also believed in giving back to the community in return for the blessings it had given him. Some of his service included Heart of Illinois Hospitality Assoc., KFC Midwest Franchisee Assoc., Peoria Area Chamber of Commerce (Chair), East Peoria Chamber of Commerce, Heartland Partnership (Founding Member), Co-Founder with Bonnie of the first D.A.R.E. not-for-profit in the country, Children's Home (Chair), Prairie State Chapter of the Rocky Mountain Elk Foundation (Co-Founder), SCORE Peoria, Tri-County Tomorrow and the University of Montana Foundation Board of Trustees (Chair). Among his awards are the Illinois Volunteer Citizen of the Year (1989), Illinois Crime Prevention Officers Association, Tom Connor Award for Continuing Service to the Community (1990) and Illinois House of Representatives - Resolution/Commendation (1991). There will be a Celebration of Life held Sunday, September 30, 2018 from 2:00-4:00pm at the Ivy Club, 5102 Galena Road in Peoria Heights. Memorials may be made to the Craig E. Russell Memorial Fund at the Children's Home Association. Online condolences may be made to the family at www.weberhurdfuneralhome.com

To send flowers to the family or plant a tree in memory of Jack Russell, please visit our floral store.

To send flowers to the family in memory of Jack Russell, please visit our flower store.