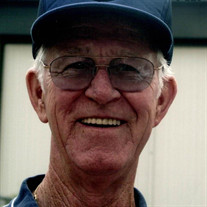 Jack L. "Captain" Moore, age 89, of Chillicothe, passed away on Wednesday, August 26, 2020 after his battle with cancer.

Surviving are his wife, Harriett; three daughters, Mickey Sue (Timothy) Traver of Crest Hill, IL, Mary Christine (Paul) Spiezio of Washington, IL and Michelle (Terry) Easler of Joliet, IL; his son, John Matthew Moore of Chicago, IL; along with numerous grandchildren and great-grandchildren. He was preceded in death by his parents; his sister, Arlene Sledgister; and his brother, Hallie Gene Moore.

Jack served his country in the Navy on the USS Raymond 341 from 1951 to 1954. Jack was a Towboat Captain for 25 years. Then he became assistant manager for Material Service, before retiring in 1995. Jack was an active life-member of the American Legion Marine Post 13 in Plainfield, IL as well as the First United Methodist Church and the Methodist Men. He enjoyed playing dartball and helping with the chili supper.

After retiring, Jack volunteered with Meals on Wheels and drove the Chillicothe Township van, taking people to their appointments. Once a month, he would drive the van to take a group of women to the mall so they could shop and have lunch out. They jokingly called themselves his "harem." He even received the Volunteer of the Year award from Pearce Community Center. One of his greatest honors was taking the Honor Flight with his son on June 26, 2012.

The family would like to thank the staff of UnityPoint Hospice and Stay at Home with Care for their care and compassion for Jack and his family.

Services will be held on Saturday, August 29, 2020 at 1pm at the First United Methodist Church in Chillicothe. Visitation will also be held at the church on Saturday from 11am to 1pm. Burial with military honors will be at Chillicothe City Cemetery following the service. Social distancing will be in effect and face coverings required. In lieu of flowers, memorial may be made to the church. Arrangements are under the care of Weber-Hurd Funeral Home in Chillicothe.


To send flowers to the family or plant a tree in memory of Jack L. "Captain" Moore, please visit our floral store.

To send flowers to the family in memory of Jack Moore, please visit our flower store.