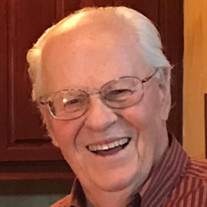 Herbert Rodier, 83, died Saturday, February 6, surrounded by family. He was born on March 24, 1937, in Webster, MA to Mary Margaret Keniry and A. Joseph Rodier. He grew up and attended high school in Oxford, MA, graduating in 1954. Always interested in aeronautics, he first attended the Academy of Aeronautics at La Guardia Airport, New York. After he received his certificate, he worked at Chance Vought Aircraft in Dallas, TX. There he met the love of his life, Marjorie Kerbow, and they were married in 1959. Herb later attended SMU in Dallas, obtaining a degree in mechanical engineering in 1962. While residing in Dallas, he raced AC Bristol sports cars in the Sports Car Club of America Division.
In 1962, Herb accepted a position at Caterpillar Tractor Co. in Mossville, IL. He worked for CAT for 36 years in various positions, last as the Manager of Engineering Service, Engine Division. He attended Bradley University, graduating in 1971 with a master's degree in Mechanical Engineering Administration. Once retired, Herb remained active at CAT as a tour guide.
Herb had many passions and hobbies. Besides keeping all the family cars running, he enjoyed restoring Jaguars. He loved coaching his children and grandchildren in basketball and softball. He travelled around the country following his daughter Amy's softball teams. Every July during "CAT vacation", he hooked up his fold-out camper and visited relatives in Massachusetts, California and Texas. He showed his family many sites and attractions across the United States. He attended Red Sox games whenever he was out East. He also followed CAT truck racing and attended several races in Europe. The racing team took him under their wings and showed him a good time at the races. For many years Herb attended the Indy 500 time trials and races whenever possible.
Herb was a devout Catholic and loved being the Class Grandpa for the third grade at St. Edwards for 20 years. He shared many stories and memorabilia from his travels, truck/car races and work life. He looked forward to spending time with "his kids" every Friday. Many still call him grandpa to this day. He was loved by everyone who knew him, always had a smile on his face and was a great example of a life well lived.
Herb was preceded in death by his parents, wife Marjorie, son Mike three brothers, Thomas J., Richard L. and Robert W., two sisters, Nancy K. Curtis and Marie T. Cotter. He is survived by his daughter Theresa (Bill) Finerty, sons Bill (Nancy) Rodier, Kip Rodier, daughter Amy (Tony) Matheny, daughter-in-law Jill Rodier, 14 grandchildren and 7 great-grandchildren and many nieces and nephews. His brother Louis (Loretta) and sister Ruth (Bill) Gilmartin also survive along with sisters-in-law Janet Rodier and Barbara Rodier.
Visitation will be at Weber-Hurd Funeral Home in Chillicothe on Friday, February 12, from 5-7 p.m. Funeral mass will be at St. Edwards on Saturday, February 13, at 11:00 a.m. Visitation will be one hour before the mass. Burial will be at St. Joseph's (Mooney) Cemetery. In lieu of flowers, donations may be made to St. Edwards Church/School or the OSF Richard L. Owens Hospice Home.

To send flowers to the family or plant a tree in memory of Herbert J. Rodier, please visit our floral store.

To send flowers to the family in memory of Herbert Rodier, please visit our flower store.