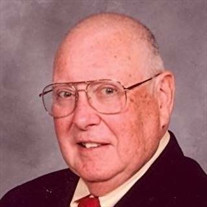 Henry "Hank" Dwight Lawrence passed away August 31, 2017. He was born in Canton, IL on February 24, 1940 to George Marion and Ila Marie (Amen) Lawrence. He married Betty Jane Cromwell on June 7, 1969 in Columbus, MI, and she survives. Also surviving are his children, Robert and wife, Melissa (Hayes) of Peoria, daughter Elizabeth of Washington, DC, granddaughter Madeline, and sister Marion Willis of Metamora. He was preceded in death by his parents and one granddaughter, Mallory Lawrence. Hank graduated from Elmwood High School in 1958. He attended the University of Illinois where he was a member of Alpha Sigma Phi fraternity and graduated from Bradley University in 1969. He retired from Caterpillar after 37 years of service. From 2001-2008, he was the head of the Commercial Real Estate department for Jim Maloof Realtor, where he was presented with the outstanding Association Realtor Award by the Peoria Area Association of Realtors in 2006. He was involved in radio for many years including WMBD. Hank was an active member of his community including St. Jude, where he helped to develop and chair the St. Jude Midwest Affiliate telethon and served as the President of the Midwest Affiliate Board of Directors from 1995-1996. He was President of WTVP CH 47 Board of Directors and volunteered as pledge host since the beginning of the station. He was honored with the CH 47 Jane Bourland Award in 2008. Politically, Hank was a member of the City of Peoria Planning Commission, member of the Heart of Peoria commission, and active with the Peoria County Republicans. Hank also served as the chair of Mayor Jim Maloof's reelection campaign in 1993. Additionally, he spent more than three decades on the Board of Governors for the Peoria Gridiron, which he chaired in 1989. He was very involved with Free Masonry. Hank was past Master of Grand View Lodge in Peoria Heights, a member of The Scottish Rite, The Shrine, Past Commander of Blaney Commandry in Tremont, Past Director of the Royal Order of Jesters, and received his 33rd Masonic degree in 2012. He was also past Chairman of the Scottish Rite Dyslexia Center of Peoria. Henry was a longtime member of First Federated Church. Cremation rites have been accorded. Visitation will be held at First Federated Church on Monday, September 4, 2017 from 3:00-6:00 PM, followed by Masonic services. The funeral will be Tuesday, September 5, 2017 at 4:00 PM at First Federated Church. Cumerford-Hurd Funeral is in charge of arrangements. In lieu of flowers, the family requests memorials be made to the St. Jude Midwest Affiliate, WTVP- Channel 47, or First Federated Church. Hank's online memorial website may be viewed at www.cumerford.com

To send flowers to the family or plant a tree in memory of Henry Lawrence, please visit our floral store.

To send flowers to the family in memory of Henry Lawrence, please visit our flower store.