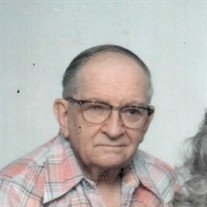 Henry E. "Sonny" Davis, 83, of Chillicothe passed away Friday, July 3, 2015 in Peoria.
Henry was born May 29, 1932 in Chillicothe to Henry "Hank" and Lela (Hahn) Davis. He married Naomi Jones on May 2, 1959 in Chillicothe. She survives.
Also surviving are: one brother, Charles F. Davis; two brothers-in-law, Gilbert (Ann) Jones, and Ivan (Christine) Jones; one sister-in-law, Bessie Haineline, all of Chillicothe; and several nieces and nephews.
He was preceded in death by his parents; one half-brother, Bob Davis; and one nephew, Charles Nicholas "Nick" Davis.
Henry made his living as a carpenter (Local #183). He held memberships at Pearce Community Center, the NRA, the Chicago Gun Club, and Rice Pond. Henry loved to go duck hunting, pigeon shooting, and fishing. Although he was born blind in one eye, Henry was known to be a spectacular shot.
A funeral will be held at 11:00am on Thursday, July 9, 2015 at Weber-Hurd Funeral Home in Chillicothe. A visitation will be held one hour prior at the funeral home. Burial follow the funeral at Chillicothe City Cemetery. Rev. Ray Harrison will officiate. Memorials in Henry's honor may be made to the donor's choice.
Henry's online memorial website may be viewed at www.hurdfamilyfunerals.com


To send flowers to the family or plant a tree in memory of Henry E. "Sonny" Davis, please visit our floral store.

To send flowers to the family in memory of Henry Davis, please visit our flower store.