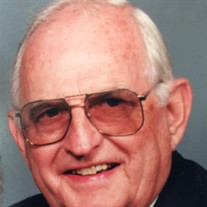 Harry started working while in high school, he had many stories of driving the Ambulance for his father, who owned a funeral home in Princeton. After high school he was drafted into the military during WWII where he served in the Navy aboard the USS Raccoon IX-127 which was an Armadillo-Class Tanker that delivered aviation fuel to the remote islands in the South Pacific. He then went on to graduate from Bradley University with a Bachelor's Degree. He worked with various Engineering and Loss Control areas of Property and Casualty Insurance Business since 1950. He was a member of the First United Methodist Church in Peoria. He enjoyed his winters at Key Colony Florida.

A funeral service will be held on Sunday afternoon, February 22, 2015 at 3:00 PM at Cumerford-Hurd Funeral Home located at 428 W. McClure Avenue, Peoria. Rev. Bob Phillips will officiate. Visitation will be held two hours prior to the service time at the funeral home. Burial will take place at Mt. Hawley Cemetery. Memorials may be made to the Alzheimer's Association or to the Wounded Warriors Fund. Harry's online memorial website may be viewed at www.cumerford.com.

To send flowers to the family or plant a tree in memory of Harry H. Price, please visit our floral store.

To send flowers to the family in memory of Harry Price, please visit our flower store.