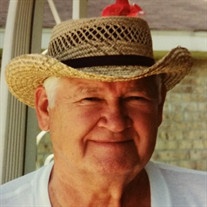 Harold Creed Hale, age 95, of Mason City, formerly of Peoria and Chillicothe, was called to Heaven on Wednesday, October 9, 2019 at his home in Mason City.

Harold trained at Camp Ellis in Illinois and Camp Lee in Virginia and served in the U.S. Army from 1942 to 1945. He was a Quartermaster in the Grave Registration Service in France and Germany during World War II. After serving the in military, Harold was employed by Pabst Grist Mill in Peoria.

Harold and Ermalene lived in Peoria and Groveland until 1984 and then moved to Alamo, Texas. After Ermalene moved to her Heavenly home, Harold moved to Chillicothe. He then resided with his daughter and son-in-law in Mason City until Jesus and a gathering of friends and family welcomed him home.

The family would like to thank Cierra Kinsel for sharing Cub and Bear TV time with Harold; Vitas Hospice for their care and compassion.

A graveside service will be held on Saturday, October 19, 2019 at 2pm at Glendale Memorial Gardens in Pekin. Rev. Brian Durbin will be officiating. Memorials may be made to the Alzheimer's Association, Juvenile Diabetes Association or to Vitas Hospice. Arrangements were handled through Weber-Hurd Funeral Home in Chillicothe. Online condolences may be made through www.weberhurdfuneralhome.com


To send flowers to the family or plant a tree in memory of Harold Creed Hale, please visit our floral store.

To send flowers to the family in memory of Harold Hale, please visit our flower store.