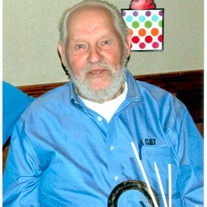 Harold P. Brautigam, 92, of Chillicothe passed away on Wednesday, July 22, 2015 at his home in Chillicothe.

Harold served in the United States Army as a Tech Corporal during WWII from February 12, 1943 to February 11, 1946. Harold worked as a Brew Master for Pabst Brewery for 25 years before retiring. During retirement Harold worked at the Chillicothe Phillips 66 Service Station in Chillicothe while maintaining a garden and vegetable stand at this home.

Funeral services for Harold will be held on Monday, July 27, 2015 at 12:00 noon at Weber-Hurd Funeral Home in Chillicothe. Rev. Matthew Synnott will officiate. Visitation will be held two hours prior to the service time on Monday at the Funeral Home. Burial will be at the Chillicothe City Cemetery with Military Rites.

Harold's online memorial website may be viewed at www.hurdfamilyfunerals.com

To send flowers to the family or plant a tree in memory of Harold Peter Brautigam, please visit our floral store.

To send flowers to the family in memory of Harold Brautigam, please visit our flower store.