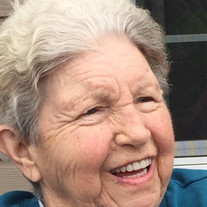 Gloria Lee (Perry) Haas, age 79, formerly of Washington, passed away peacefully at Grand View Alzheimer's Special Care Center in Peoria on Thursday, June 22, 2017. She was born to Ralph and Cassie (Gobel) Perry on a houseboat in Hickory Township on August 4, 1937. Gloria is survived by her children Tim (Karen) Tattersall of Glenwood, IA and Ja'nice (Jay) Pearson of Peoria; 9 grandchildren, Bill (Amy) Tattersall, Chelsey Martinez, Addy (Mike) Spears, Brianne Pearson, Nikia Pearson, Jamara Pearson, Caleb Pearson, Christiaan Pearson, and Deven Pearson; 8 great-grandchildren, Sam and Grace Tattersall, Donovan Robey, Hailey Duke, Angeli Martinez, Jay Pearson and Amyia and Alaysia Tassin; brother, Jack Perry; sister-in-law, Cathie Perry; and a host of other friends and family members. She was preceded in death by her parents; daughter, Nikia Lopeman; and a favorite uncle, Virgil Gobel. Gloria was a graduate of Woodruff High School. She worked at both Quail Meadows and Pine Lakes Golf Courses as a restaurant manager and a bookkeeper . She was a member of Cornerstone Baptist Church in Groveland and the Red Hat Society. Gloria enjoyed golfing, bowling, dancing, attending Women's Bible Study Group, volunteering for Youth for Christ, traveling, and playing cards. Her family would like to offer special thanks to the staff of Harbor Light Hospice and Grand View Alzheimer's Special Care Center for their loving and dedicated care. A memorial service for Gloria will be held at Cumerford-Hurd Funeral Home on Monday, June 26, 2017 at 7:00 PM. Visitation will be held one hour prior to the service. Burial will be at a later date. Memorials in honor of Gloria may be made to Youth for Christ, 4100 N. Brandywine Dr, Peoria IL 61614. Gloria's online memorial website may be viewed at www.cumerford.com

To send flowers to the family or plant a tree in memory of Gloria Haas, please visit our floral store.

To send flowers to the family in memory of Gloria Haas, please visit our flower store.