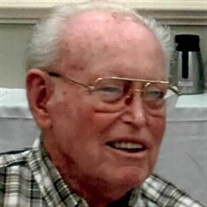 Glendon "Cookie" Cook, 87,of Chillicothe died on Wednesday the 25th of March of 2015 at UnityPoint Methodist Hospital in Peoria.
Cookie was born on the 10th day of January of 1928 the son of Estill and Ada (White) Cook. He married Evelyn L. Brown on the 31st day of December of 1949 in Atlanta, IL.
Cookie is survived by his wife of 65 years of Chillicothe; four children, Deborah K. Cook (Clardy) of South Bend, IN, Cynthia L. (Dennis) Heffron of Peoria, Ralph G. Cook of Lincoln, and Diana L. (John) Hulme of Estero, FL; nine grandchildren, Christopher (Kaysha) Simpson, Liberty Mroczek, Megan (Jacob) Chandler, Dereck (Laura) Heffron, Chelsy (Scott) Heffron-King, Dustin (Jana) Heffron, Mandy (Chris) Crodray, Marcia Cook and Sara Cook; sixteen great grandchildren; 10 nieces and nephews; many great nieces and nephews; and one brother, Kenneth Cook of Chicago. He was predeceased by his parents, his sisters, Bertha Fouche', Virginia Renfrow, and Marie Milam, and a brother, Leonard Cook.
Cookie was a Ford Auto Mechanic in Atlanta owning his own shop for more than 20 years, known as Cookie's Garage. He was known by Ford Motor Company as the key "go to guy" that could fix any Lincoln cars. He then worked for Caterpillar Tractor Company for the next 24 years before retiring in 1990. Glendon was always recognizable by his love of " big stogy cigars" and always had one in his mouth. He also loved to fly, owning a single engine two seater Taylor Craft and would go on dates with Evelyn flying to fly-ins and to Chicago to go dancing. After retiring from Caterpillar, he went back to flying and became member of the Marshall County Flying Club at the Marshall County Airport.
Cookie is known by his family and friends as a guy who always left an impression on everyone he met. At home he took a lot of pride in his house, taking care his yard, his Lincoln's, and his John Deer tractor.. As the computer age came about he kept up on his knowledge of computers.
Friends are invited to a visitation with the family on Saturday afternoon the 28th day of March of 2015 from 1:00 to 3:00 pm at Weber-Hurd Funeral Home located at 1107 North Fourth Street in Chillicothe. The family requests that memorial contributions in memory of Cookie be made to Chillicothe Community Fire Station 4 in Rome or to Rescue 33. Glendon's online memorial website may be viewed at www.hurdfamilyfunerals.com

To send flowers to the family or plant a tree in memory of Glendon "Cookie" Cook, please visit our floral store.

To send flowers to the family in memory of Glendon Cook, please visit our flower store.