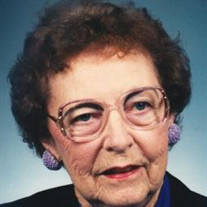 Gladys G. Northrup passed away on July 29, 2015 at 3:30 AM at the Michealsen Center Health Center in Batavia, Illinois, just ten days short of her 101st birthday. She was born August 7, 1914 to John and Gertrude Harvey, in a farmhouse near Sparland, Illinois. She married Kenneth L. Northrup December 29, 1934, and except for relocation to Robbinsdale, Minnesota for the World War II years, (so Kenny could work in a wartime production factory) they spent nearly their entire married lives in Chillicothe, Illinois. Gladys moved on to the Holmstad retirement home in Batavia, Illinois in 2002.
Gladys was preceded in death by her parents, sisters Grace Walk and Marian Easter, and brothers Fred and Richard Harvey. She is survived by her daughter, Karen Fehringer (Gene), son Kevin ‘Bud' Northrup, grandchildren Rick Fulk (Carrie), Tim Fulk (Sylvia), Lori Gasparaitis, Kaleb Northrup (Sarah), and Jason Northrup, as well as great-grandchildren Anthony Gasparaitis, Steven Gasparaitis, Jake Fulk, Amanda Fulk and Ann Fulk.
Gladys was very active in the Chillicothe community, especially the Methodist church where she was a member of the choir for over 50 years. She also served the church for many years as the Primary Sunday School director, and director of the youth choir. She also sang in the choir at the Blue Ridge Methodist church for many years. She will be remembered for her love and devotion to both her family and her church and will be painfully missed by all who knew her.
Gladys worked part time for several years at Mannering's Men's Wear and Kenny Carr's IGA food market, as well as driving a cab for a short while. She was an avid card player, especially good at Bridge. She was in the same Bridge club for over 50 years, covering her life from her pregnancy with Karen to the birth of her great grandchildren. When she moved into the Holmstad Retirement Community, one of the first things she did was organize Bridge and Pinochle games for the residents. She was also a loyal Cub fan.
Visitation will be held at the Weber-Hurd Funeral Home in Chillicothe, at 11:00 AM Saturday, August 1, followed by a memorial service there at noon, then internment in the Chillicothe cemetery. Glady's online memorial website may be viewed at www.hurdfamilyfunerals.com


To send flowers to the family or plant a tree in memory of Gladys G. Northrup, please visit our floral store.

To send flowers to the family in memory of Gladys Northrup, please visit our flower store.