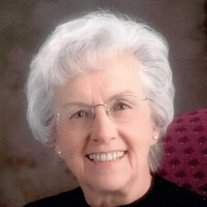 Gertrude Ann Hoskins of Chillicothe, Illinois died at 4:23 a.m. at Evergreen Assisted Living in Chillicothe.
Born June 7, 1927 in Putnam County to Bertha C. Bogner and William F. Wolf in McNabb, Illinois, Ann married Thomas C. Hoskins on November 19, 1959. He died July 21, 1978. She was preceded in death by a brother, Wilbur Wolf and a sister, Katie Breen.
Surviving are her nephews Tom (Linda) Breen, Jerry (Pam) Breen, Patrick Breen, Mike (Maureen) Wolf; nieces Mary (Byron) Underwood, Beth (the late Dan) Bakel, Margie (Bob) Roach, Lee (Larry) Olesen; and a sister-in-law, Pat Wolf.
Ann graduated from Henry High School in 1946 and attended Browns Business College in Peoria, Illinois and Illinois Central College, East Peoria, Illinois. She was employed with Central Illinois Light Company for over 40 years retiring in 1994, having worked at locations in Lacon, Chillicothe, and Peoria.
She was a member of St. Edward Catholic Church, their choir and past president of the Liturgy team, Cursillo, Beginning Experience, Churp, and Clown Ministry. She was also a member of the Cilco Girls Club, Quarter Century Club of Cilco, past director of Altrusa Club in Chillicothe where she received a 50 year pin in September 2015. She was a member of the Lacon Country Club and Pearce Community Center. Ann had also been a volunteer at Proctor Hospital.
A memorial service will be held at a later date and there will be no visitation. Cremation rites have been accorded and internment will be in Mt. Palatine Cemetery in McNabb, Illinois at a later date.
Memorials may be made to St. Edward Catholic Church in Chillicothe, Illinois.

To send flowers to the family or plant a tree in memory of Gertrude Ann Hoskins, please visit our floral store.

To send flowers to the family in memory of Gertrude Hoskins, please visit our flower store.