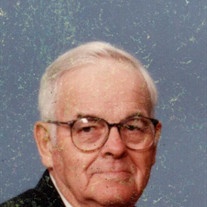 Bud was born April 13, 1927 in Peoria, the son of Fred Kelly and Josephine Maston. He was raised by his aunt and uncle, Maurice and Margaret Miller in rural Chillicothe. He later married Katherine Kelly. She preceded him in death on September 14, 2015.

Bud was a farmer for 62 years and an implement salesman at John Deere Equipment.

He was also a proud veteran of the U.S. Army.

He was a member of the American Legion, La Prairie Township Supervisor, served on the School Board and multi-township Assessor Board. He was also a church elder and sat on the church cemetery board at LaPrairie United Presbyterian Church.

A funeral for Bud will be held at 11:00am on Tuesday, March 1st, 2016 at LaPrairie United Presbyterian Church in Sparland. Friends and relatives are invited to visitations one hour prior to the service at the church, or the evening prior from 5-7:00pm at Weber-Hurd Funeral Home in Chillicothe. Burial will be at LaPrairie United Presbyterian Church Cemetery. Pastor Melinda Stephenson will officiate.

Memorials may be given to LaPrairie United Presbyterian Church or Rescue 33.

Bud's online memorial may be viewed at www.weberhurdfuneralhome.com


To send flowers to the family or plant a tree in memory of Frederick Edward Kelly, please visit our floral store.

To send flowers to the family in memory of Frederick Kelly, please visit our flower store.