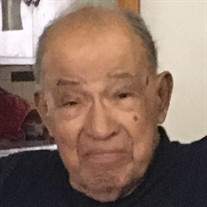 Frank J. Razo, Sr., 97, of Chillicothe passed away on Saturday, April 11, 2020 at his home in Chillicothe.
Frank was born on August 27, 1922 in Wilbern IL the son of Natividad and Ruperta (Fernandez) Razo. He married Mary L. Rodriquez on May 10, 1952 in Streator.
Surviving are his children: Christina Razo of Dunlap, Theresa (Larry) Cook of Chillicothe, Frank J. Razo, Jr of Plano, Cecilia (Robert) Seifert of Chicago, Anthony Razo of Southampton, N.J., Alex (Jean) Razo of Chillicothe, Phillip Razo of Chillicothe, Andrea (Mike) Denham of Eureka and Matt (Sandy) Razo of Fairbury; 17 grandchildren, 14 great grandchildren; and two brothers Richard Razo of Placerville, CA and John (Ester) Razo of Peoria. He is preceded in death by his parents, wife, brothers Salvador and David, and a sister Carmen Herron.
Frank was a U.S. Army Veteran serving during WW II in the European Theater with the 90th Division Anti Tank Company. He was a member of the Chillicothe VFW Post 4999.
Frank was a long time barber in Chillicothe and owned Frank's Barbershop. He also worked for 19 years as the custodian at the Chillicothe US Post Office.
He was a member of St. Edward Catholic Church where he was on the Dart Ball Team and a member of the Men's Club. He was a past member of the Chillicothe Jaycees and Rotary.
Frank was a loving and supportive father and grandfather. He loved to teach, watch and play with his children, grandchildren and great grandchildren. He loved being outdoors and spending time in his garden. He was a lifelong Cubs fan.
Sincere thanks to all his caregivers during this past year from Comfort Keepers. Also to OSF Hospice for their special care and support.
Cremation rites have been accorded. A memorial mass will be held later at his church with a committal at the Chillicothe City Cemetery. Memorials may be made to St. Edward Catholic Church or to the Chillicothe Public Library. You may visit Frank's online memorial website at www.hurdfamilyfunerals.com.

To send flowers to the family or plant a tree in memory of Frank J. Razo, please visit our floral store.

To send flowers to the family in memory of Frank Razo, please visit our flower store.