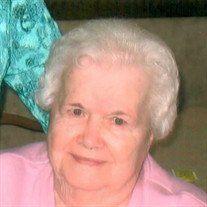 She was preceded in death by her husband, parents, one brother, and one sister.

A funeral mass is scheduled for 11 a.m. at St. Edward's Catholic Church, Chillicothe, on Thursday, August 13, 2015. Visitation will be held one hour prior to the service at the church. A reception will follow the burial at Chillicothe City Cemetery.

Memorials may be made to Heritage Health Activities, Chillicothe.

The family would like to express their sincere gratitude for the care and love shown by the staff at Heritage Health.

An online memorial website for Frances may be viewed at www.hurdfamilyfunerals.com


To send flowers to the family or plant a tree in memory of Frances E. Powers, please visit our floral store.

To send flowers to the family in memory of Frances Powers, please visit our flower store.