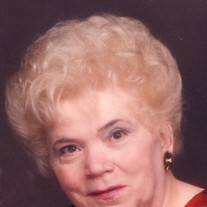 Frances M. Manock, 88, of Lacon passed away Sunday, April 9, 2017, at UnityPoint Methodist Hospital in Peoria. She was born May 21, 1928, in Chicago, the daughter of Russell S. and Pauline A. (Miller) Tamburo. She married Eugene Gordon on February 28, 1948. She later married Wilbur Gobble who died January 1988. She married Eugene S. Manock on December 10, 1988, in Peoria. He died Monday, April 10, 2017, in Lacon, several hours after her death. She is survived by her daughter, Della (Clayton) Wilburn Hicks of Rocky Mount, VA; two stepdaughters, Gail (Robert) Polonus of Dunlap and Judith (Joseph) Murphy of Sparland; her grandchildren, Cindy Wilburn, Maria Gordon, Stephen Wilburn, and Harley Wyldekat; her step-grandchildren, Rita (Matt) Cowell, Kevin (Emily) Polonus, and Christina Pyles; four great grandchildren, eight step-great grandchildren; and three great, great grandchildren. She was preceded in death by her parents, five brothers, two sisters, her son, Russell Eugene Gordon, and grandson, J.R. Gordon. Frances was a devoted housewife and loved helping others. For a time, she worked for Burgett Glove Company in Peoria sewing golf gloves, and advanced to training other employees. A funeral service will be held on Saturday, April 15, 2017, at 12:00 noon at Weber-Hurd Funeral Home in Chillicothe, with Deacon Bob Murphy officiating. Visitation will be two hours prior to the service at the mortuary on April 15, 2017. Entombment will follow at the Lacon Mausoleum in Lacon. Memorials may be made to St. Joseph Nursing Home in Lacon. Frances' online memorial website may be viewed at www.weberhurdfuneralhome.com

To send flowers to the family or plant a tree in memory of Frances Manock, please visit our floral store.

To send flowers to the family in memory of Frances Manock, please visit our flower store.