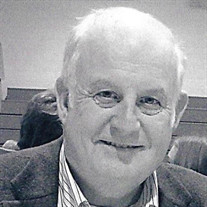 Forrest D. Serblin 79 of Peoria, Formerly of Chicago passed away on Saturday August 22, 2020 at OSF St. Francis Medical Center. He was born on August 18, 1941 in Chicago the son of Michael and Kathleen (Meagher) Serblin. He married Mary Salisbury in 1973 in Chicago, Il. She preceded him in death in 2001.
He was a graduate of the University of Illinois Law School class of 1966. Forrest proudly served his country in the U.S. Army Field Artillery from 1967-1969. He was a member of the Illinois Bar and a practicing attorney since 1969, including 26 years at Caterpillar Inc. His memberships included Chi Psi Lodge Alpha Zeta Delta of Champaign, IL; American Legion Post 593 and the Forrest Hill United Methodist Church.
Forrest is survived by his two sons: James (Michelle) Serblin of Peoria, Joseph Serblin of Chicago; four grandchildren: Emily, Rowan, Michael, Mary; three sisters: Noreen Ward of Omaha, NE, Cynthia (Bryce) Esgar of Colorado Springs, CO and Priscilla Gilmore of San Bruno, Ca.
Forrest was preceded in death by his parents, wife and one daughter Jean.
He will be remembered as a dear husband, loving father and a cherished grandfather.
A visitation will be held on August 27, 2020 at Cumerford-Clary Funeral Home in Peoria from 4-6pm. Burial will take place at Acacia Park Cemetery in Norridge, IL on August 28, 2020. Cumerford-Clary Funeral Home (428 W McClure Ave Peoria, IL 61604) is assisting the family with the funeral arrangements.
Online tributes and condolences may be made at www.hurdfamilyfunerals.com. Memorial Contributions in honor of Forrest may be directed to Forrest Hill United Methodist Church.


To send flowers to the family or plant a tree in memory of Forrest D. Serblin, please visit our floral store.

Please click here to view the video tribute
To send flowers to the family in memory of Forrest Serblin, please visit our flower store.