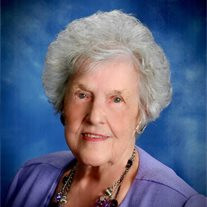 Fern D Rogers, 93, of Peoria passed away on December 22, 2017 at 8:20 pm at her home. Fern was born on January 30, 1924 to Albert O. and Goldie M. (Sturm) Kuhn. She married Paul W. Rogers on June 21, 1947 in Peoria. He preceded her in death on September 1987. Surviving are two daughters, Nancy J. Johnson of Peoria and Jan M. (Steven) Ballard of Moline; five grandchildren; two step grandchildren; and 2 great grandchildren; and several nieces and nephews. She was preceded in death by her parents, husband, daughter Karen Leigh, son Stephen Rogers, and brother Vergil Kuhn. Fern graduated from Brown's Business School and worked as a secretary at the Home Extension Office. She was a member of the First United Methodist Church, Tri Ts, Brown's Sorority, Homemakers-Extension Office. A funeral service will be held on Wednesday, December 27, 2017 at 2:00 PM at Cumerford-Hurd Funeral Home located at 428 West McClure Avenue, Peoria. Visitation will be held one hour prior to the service time at the funeral home. Burial will be held at the American Mausoleum. Memorials may be made to UnityPoint Hospice. Fern's online memorial website may be viewed at www.cumerford.com

To send flowers to the family or plant a tree in memory of Fern Rogers, please visit our floral store.

To send flowers to the family in memory of Fern Rogers, please visit our flower store.