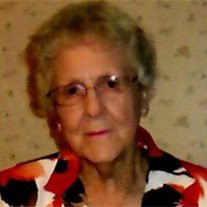 Fern Emily Appel, 94 of Chillicothe passed away on Thursday, August 10, 2017 at Heritage Manor in Chillicothe. She was born on August 9, 1923 near Chillicothe to John Adam and Madeline (Preston) Bauer. She married Milford L. Appel in Palmyra, Missouri on July 3, 1942. They celebrated 70 years together before his passing in 2013. Fern was a lifelong Chillicothe resident and an active member of the First United Methodist Church in Chillicothe for over 80 years. She was a stay at home Mom until her children were grown and then she worked as an Activity Director at Parkhill Nursing Home, retiring in 1985 with 20 years of service. Fern was a beloved and loving daughter, sister, wife, mother, grandmother, great grandmother, aunt and friend. She was preceded in death by her parents, husband Milford, and her son Jim. Her brothers, Leonard Stanley, Frances (Pete), Augustus (Chuggie), Harold (Hob) and Richard (Bud); her sisters: Agnes Hollandsworth, Lena Schroeder, Blanche Shrader, Minnie Douglas, Mary Ratliff, Lois Pease, Gladys Hawksworth and Helen Crew; and brothers-in-law: Eugene, Harold and Ralph Appel and their spouses. Fern is survived by her daughter Cinda and son-in-law Bob Habgood of Bedford, TX; grandchildren: Ian Holland of Creve Coeur, Christopher (Fanny) Habgood of Austin, TX and Shannon (Matthew) Morton of College Station, TX and three great grandchildren: Elizabeth, Abigail and Samuel Morton of College Station. She is also survived by many nieces and nephews. Funeral services for Fern will be held on Monday, August 14, 2017 at 11:00 am at the First United Methodist Church in Chillicothe with visitation two hours prior to the service time at the church. Burial will be in the Chillicothe City Cemetery next to her beloved husband, Milford. Memorials may be made to First United Methodist Church of Chillicothe for the Milford, Fern and Jim Appel Memorial Fund. Fern's online memorial website may be viewed at www.weberhurdfuneralhome.com. Service arrangements are entrusted to Weber-Hurd Funeral Home, Chillicothe.

To send flowers to the family or plant a tree in memory of Fern Appel, please visit our floral store.

To send flowers to the family in memory of Fern Appel, please visit our flower store.