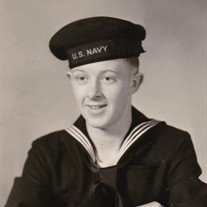 Eugene S. Manock, 89, of Lacon, passed away Monday, April 10, 2017, at St. Joseph Nursing Home in Lacon, Illinois. He was born October 14, 1927, in Keota, Iowa, the son of Clifford S. and Oletha E. (Seeton) Manock. He married Lois M. Gibbs on October 9, 1949, in Sparland, Illinois. He later married Frances M. Gobble on December 10, 1988, in Peoria. He is survived by his daughters, Gail (Robert) Polonus of Dunlap and Judith (Joseph) Murphy of Sparland; stepdaughter, Della (Clayton) Wilburn Hicks of Rocky Mount, VA; his grandchildren, Rita (Matt) Cowell, Kevin (Emily) Polonus, and Christina Pyles; his step-grandchildren, Cindy Wilburn, Maria Gordon, Stephen Wilburn, and Harley Wyldekat; eight great grandchildren; four step-great grandchildren; and three step-great, great grandchildren. He was preceded in death by his parents, his wife, Lois, on June 3, 1988, and his second wife, Frances, just hours prior to his death, two brothers, Lyle and Clifford Manock, one stepson, Russell Eugene Gordon, and one step-grandson, J. R. Gordon. Eugene served in the U. S. Navy during 1946-47, with a tour in Japan, as well as eighteen months on the USS Tarawa (CV-40) aircraft carrier. He farmed in Marshall County for 42 years and was active in his community. He served as the Director of Marshall-Putnam Farm Bureau for eight years and as Marshall County Supervisor of Assessments for five years. After moving to Peoria, he was an office manager for K's Merchandise, and later a bookkeeper for Peoria Engraving Company, retiring in 1994. A funeral service will be held on Saturday, April 15, 2017, at 12:00 noon at Weber-Hurd Funeral Home in Chillicothe, with Deacon Bob Murphy officiating. Visitation will be two hours prior to the service at the mortuary on April 15, 2017. Entombment will follow at the Lacon Mausoleum in Lacon. Memorials may be made to St. Joseph Nursing Home in Lacon. Eugene's online memorial website may be viewed at www.weberhurdfuneralhome.com

To send flowers to the family or plant a tree in memory of Eugene Manock, please visit our floral store.

To send flowers to the family in memory of Eugene Manock, please visit our flower store.