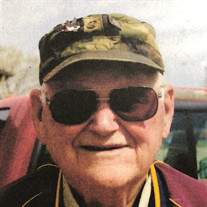 Gene was born on October 14, 1925 in Peoria, Illinois to Roy W. and Eva (Lewis) Wilcox. He was preceded in death by his parents, two brothers and two sisters.

In the early years, Gene worked on a tugboat as a deckhand on the Illinois River. When he was 17 years, he enlisted in the U.S. Navy. He served on a number of ships during World War II. After the war, he was made pilot of the USS Creon and piloted it to the Bikini Atoll. Gene was also part of Operation Crossroads nuclear weapons test. Upon returning to Chillicothe, Gene joined the Army National Guard, serving ten years on their rifle team.

In the late 1960's , Gene began working for Campus Crusade for Christ in California and then at Northern Illinois University until 1972. He then moved to Dalton, Kentucky and was a farmer. After he retired, he moved back to Chillicothe. Gene enjoyed working out at Pearce Community Center and he was an avid duck hunter and wood carver.

A private graveside service will be held at Chillicothe City Cemetery. Memorials may be made to Pearce Community Center, 609 W. Cedar Court in Chillicothe. Arrangements are under the care of Weber-Hurd Funeral Home in Chillicothe. Online condolences may made through www.weberhurdfuneralhome.com

To send flowers to the family or plant a tree in memory of Emil E. "Temo" Wilcox, please visit our floral store.

To send flowers to the family in memory of Emil Wilcox, please visit our flower store.