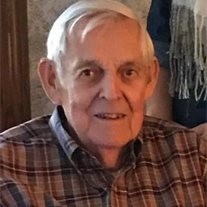 Earl Duane "Woody" Woodall, 84, of Chillicothe passed away on Sunday, April 29, 2018. He was born on July 22, 1933 in Deland, IL the son of Aaron and Grace (Benjamin) Woodall. He married Linda K. Walden on July 5, 1959 in Monticello. Surviving is his wife, Linda of Chillicothe; a son, Jeff (Jenny) Woodall of Normal; three grandchildren, Erica Woodall of Plainfield, IN, Ryan Woodall of Sacramento, CA, and Jessica Woodall of Normal; a sister, Juanita Kallenbach of Monticello and; a brother, Ralph (Sally) Woodall of Kernerville, NC. He was preceded in death by his parents, brother Chet, and sister Mildred. Earl was a U.S. Army Veteran, serving during the Korean War. He was a Life member of VFW (Chillicothe Post 4999), Veteran Memorial Commission as a Board member, Member of the Chillicothe American Legion Post 9, a Life member of the AMVETS Post 77 and a member of the Argenta Masonic Lodge #871 A.F. and A.M. Earl retired from Caterpillar Tractor Company in 1991 after 35 years of service. Earl enjoyed playing golf and loved to spend time with his family. He especially adored his grandkids, he enjoyed being around them and going to their many sporting events and activities. A funeral service will be held on Friday, May 4, 2018 at 10 am at Weber-Hurd Funeral Home in Chillicothe. Visitation will be held on Thursday, May 3, from 4-6 pm at the funeral home. Burial will be in the Chillicothe City Cemetery. Memorials may be made to the VFW Post 4999 or to any other veteran organization of your choice in his honor. Earl's online memorial website may be viewed at www.weberhurdfuneralhome.com

To send flowers to the family or plant a tree in memory of Earl Woodall, please visit our floral store.

To send flowers to the family in memory of Earl Woodall, please visit our flower store.