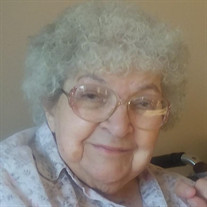 Dorothy was born on November 29, 1921 in LaSalle, IL to Vincent and Victoria (Nogia) Baron. She married Norman Paul Schaer on October 25, 1949. He preceded her in death on May 11, 1988. Also preceding her in death are her parents; seven siblings; and one daughter-in-law, Karen Schaer.

Dorothy was a homemaker and farm wife. She was a 70-year member of St Edward Catholic Church in Chillicothe. She enjoyed polka dancing with Norman at The Hub, selling vegetables at the family farm and watching baseball and The Lawrence Welk Show. Dorothy was a very giving person and she never let anyone leave her home empty-handed.

Dorothy's family would like to thank the wonderful staff at St. Joseph Nursing Home for the love and care over the past two years.

A funeral Mass will be held on Thursday, January 30, 2020 at 11am at St. Edward Catholic Church. Visitation will be one hour prior to Mass with a Rosary. Father Matthew Deptula will be officiating. Burial will be at Chillicothe City Cemetery. In lieu of flowers, memorials may be made to St. Edward Catholic Church, St. Joseph Nursing Home or the Daughters of St. Francis of Assisi. Arrangements were entrusted to Weber-Hurd Funeral Home in Chillicothe. Online condolences may be made through www.weberhurdfuneralhome.com


To send flowers to the family or plant a tree in memory of Dorothy Schaer, please visit our floral store.

To send flowers to the family in memory of Dorothy Schaer, please visit our flower store.