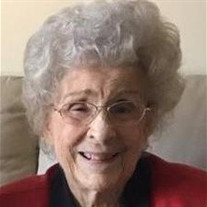 Dorothy Dierdorff, 93, of Chillicothe died at 3:13am on Friday, December 6, 2019 at OSF St. Francis Medical Center in Peoria.

Dorothy was born on October 20, 1926 in Farmington to Joe and Edna (Custer) Scott. Dorothy married Melvin Dierdorff in Fairview.

Dorothy worked for the First National Bank of Chillicothe for twenty years. She and her husband owned and operated the Chilli Bowl Bowling Center from 1959 to 2006.

She was a member of Arrowhead Country Club and Chillicothe First United Methodist Church.

A funeral service will be held on Saturday, December 14, 2019 at 2:30 pm at Resurrection Mausoleum, 7519 N. Allen Road in Peoria. Visitation will be held at the mausoleum one hour prior to the service time. Memorials may be made to Chillicothe First United Methodist Church.


To send flowers to the family or plant a tree in memory of Dorothy Dierdorff, please visit our floral store.

To send flowers to the family in memory of Dorothy Dierdorff, please visit our flower store.