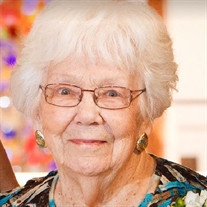 Dora L. Gray, age 97, of Peoria passed away at UnityPoint Methodist Medical Center on Saturday, March 11, 2017. She was born to Thomas and Amy Louise (Davis) Mason on January 16, 1920 in Cuba, IL. She married Gerald John Gray and they celebrated 49 years together before his passing in 1988. Dora was also preceded in death by her parents; infant son, James Lynn Gray; sister, Flora Frazier; brothers, Thomas Mason and Neil Mason; and daughter-in-law, Norma Gray. She is survived by her daughter, Barbara (Larry) Kelley of Bloomington; son, Victor Gray of South Wilmington; sister, Shirley Keefauver of Cuba; brother, Jim Mason of Port Orchard, WA; grandchildren, Vicci (Ron) Brandel of Hudson, Terry (Brenda) Gray of Coal City, Brenda (Ed) Strahan of Braidwood, Nicki Carson of Bossier City, LA, Stacy (Tony) Faletti of South Wilmington, Amy (Rick) Kapraun of Peoria, Jennifer (Chad) Phillips of Naperville, Shannon (Mike) Bickett of Plainfield, and Erin (Christopher) Cox of Normal; 18 great-grandchildren; and two great-great-grandchildren. Dora was an avid, lifelong fan of the Chicago Cubs and said in a televised interview that if the Cubs won the World Series, she could die happy. When Dora was 79, she made the move from Cuba, where she lived her whole life, to Lutheran Hillside Village in Peoria. A memorial service for Dora will be held at Lutheran Hillside Village at 10:00 AM on Saturday, March 18, 2017. Pastor Paul Park will officiate. Visitation will be held one hour prior to the service. Burial will be held at a later date in Cuba Cemetery. In lieu of flowers, memorial contributions may be made to Juvenile Diabetes Research Foundation, 26 Broadway, 14th Floor, New York, NY 10004, or to Lutheran Hillside Village Foundation, 6901 N. Galena Rd., Peoria, IL 61614. Dora's online memorial website may be viewed at www.cumerford.com

To send flowers to the family or plant a tree in memory of Dora Gray, please visit our floral store.

To send flowers to the family in memory of Dora Gray, please visit our flower store.