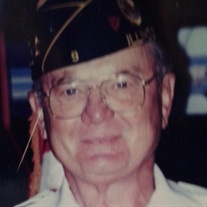 Don was born in October of 1926 in Streator, IL to Albert Raye and Lila Merida (Stringer) Homer. He married Josephine Workman on June 12, 1948 in Peoria.

Surviving are his wife, Josephine; his children, Donna (Steve) Hess of Vero Beach, FL and William (Sally) Pillman of Peoria, IL; three grandchildren, Melissa Guertin of Minneapolis, MN and Laurie and Jennifer Pillman, both of Peoria; and four great-grandchildren, Elsie, Jameson, McKell and Maceo. He was preceded in death by his parents and his sister, Dorothy Abernathy.

Don served in the U.S. Marine Corps and then he worked for Caterpillar for over 30 years. He was a life-member and Past Commander of the American Legion Post #9, a member of the VFW and was a Boy Scout Leader. He also enjoyed fishing, golfing and bowling.

Cremation rites will be accorded and a private family graveside will be held at Chillicothe City Cemetery with military honors. In lieu of flowers, memorials may be made to the Chillicothe American Legion Post #9, 1043 N. 2nd Street, Chillicothe, IL. Arrangements were handled through Weber-Hurd Funeral Home in Chillicothe.

To send flowers to the family or plant a tree in memory of Donald R. Pillman, please visit our floral store.

To send flowers to the family in memory of Donald Pillman, please visit our flower store.