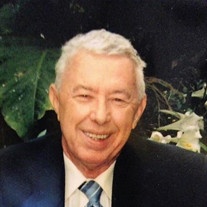 Donald Roger "Poppy" Ball, born January 2, 1932 to Edward and Romona (Travers) Ball, passed away peacefully on the morning of Sunday, February 26th. He was proceeded in death by his parents, brother Alan Ball, wife Cherrill L Bachler, second wife Mary Hurst, and third wife Dinah Bergquist. Surviving are his children - Marcia K (Appel) McKee (Gregory) of Bartonville, Shawn M Ball (Shelia Grimes) of Peoria, and Holly S (Moser) Adornato (Frank) of Peoria; Granddaughter - Rowana P (Appel) Robles (Christopher) of Stanford; Great-Grand Sons - Micah B and Hank E Robles; Siblings - Kermit I Ball of Columbus, OH, Mona L (Kip) Sullivan of Alpine, TX; three nephews, one niece, and several great nieces/nephews. Don joined the Army in 1952, and married his childhood sweetheart, Cherrill, June 9, 1953. While in the U.S. Army (1952-1954), he lived in ElPaso, TX and was involved in the nuclear bomb testing during the Korean War. They moved back to Peoria, IL and Don began working at CAT as a tool and Dye maker apprentice. In 1960 they adopted their first daughter, Marcia, followed by their son, Shawn, in 1962. Shortly after they moved to their home in Chillicothe and adopted their precious daughter, Holly, in 1964. Don continued to work for CAT for 42-years, where he became a foreman and supervisor. While raising his three children, he served many years as a Boy Scout Troop Leader in the early/mid-70's, and coached Holly's "misfit" softball team for several years during the late 70's/early 80's. Throughout his life, Don was active in wood carving clubs, an avid self-taught (with the help of Bob Ross) painter, and wood worker/carpenter. Cherrill passed away in 1996 and Don married his second wife, Mary, in 1998. They shared a very happy, but unfortunately short, marriage as Mary passed away a year after they got married. Don married his third wife, Dinah, in 2001. During their marriage, they enjoyed being "snow birds" and going on cruises. Don lost Dinah in 2015. Don was a very witty man - always telling jokes; He was also very intelligent and full of facts and stories. Don's family would like to thank the staff at Heritage Manor, specifically Jason and Deziree and nurses Sarah and Amy, as well as the staff at Unity Point Methodist, especially his ICU nurses - Abbie and Cassie, and especially Kayla - the wonderful moments had with Don/Poppy those last couple of days would not have been possible without all of you...Keep dancing Kayla! Everyone leans on their family during times of need and for many, family consists of more than those that are relatives. Other "family" that should be mentioned/thanked for support over the years includes: Patti (Bannister) Ritchie-Williams of Phoenix, AZ/Tony Nacarato , Gina (Nacarato) Dunphy, Laurie (Killion) Long, Tara (Crawley) Sharp of Peoria/ Kathy Cain and family of Mossville/Mrs. Muffy Walsh and family, Roxie Poplette and Jackie (Anthony) and Mike Brown of Chillicothe/Gary (Tina) Frank of East Peoria/former son-in-law Curt Moser of Tremont/Teresa "Taz" (Sutton) Bohanan of Washington/as well as Joel and Jennifer McAllister and Melinda Delgado of Jackson, MI. A visitation will be held on Wednesday, March 8th at Weber-Hurd Funeral Home in Chillicothe, IL from 4-6:00 pm, followed by a short service, and finally to Grecian Gardens (his favorite) to share stories, tears and laughter. Memorial contributions may be made in Poppy's name to the ARK in Lacon or TAPS in Pekin. Donald's online memorial tribute may be viewed at www.weberhurdfuneralhome.com.

To send flowers to the family or plant a tree in memory of Donald Ball, please visit our floral store.

To send flowers to the family in memory of Donald Ball, please visit our flower store.