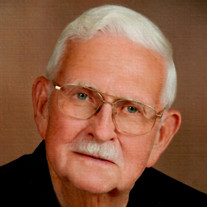 Don Flinner, age 84, of Chillicothe passed away on Monday, September 4, 2017 at Evergreen Senior Living in Chillicothe. Don was born on May 29,1933 in East Peoria to Robert and Mildred Dilzer. Upon their passing, he was adopted and raised by Lester and Pearl (Maubach) Flinner. He married Shirley J. Stotler on August 7, 1954 in Camp Grove. She preceded him in death on January 20, 2010. Surviving are one son: Steve (Karen) Flinner of St. Louis, MO; two daughters, Diana Kelly of Peoria and Debbie (Steve) Reginald of Chillicothe; 6 grandsons; 3 granddaughters; 3 great grandchildren; and one sister, Jean Neuhalfen of Henry. He was preceded in death by his parents; one daughter, Regina Smith; and one granddaughter, Jamie Marie Reginald. Don graduated from Henry High School and worked for Caterpillar as a welder until his retirement in 1997. He was a member of St. Edwards Catholic Church and the American Legion in Chillicothe, and enjoyed spending time with his family. The family would like to offer special thanks to OSF Hospice, Sister Angelica, and Don's caregiver, Yolanda for their care and compassion. A funeral mass for Don will be held on Friday, September 8, 2017 at St. Edwards Catholic Church at 11:00 AM. Msgr. Michael C. Bliss will officiate. Visitation will be held one hour prior to the service at the church. Burial will be held at Blue Ridge Cemetery. In lieu of flowers, memorial contributions in honor of Don may be made to Juvenile Diabetes Research Foundation. Don's online memorial website may be viewed at www.weberhurdfuneralhome.com

To send flowers to the family or plant a tree in memory of Don Flinner, please visit our floral store.

To send flowers to the family in memory of Don Flinner, please visit our flower store.