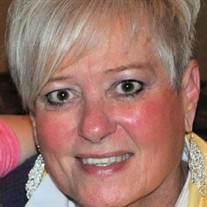 Diane was born on November 16, 1955 in Peoria, IL to Larry and Barbara (Hoskins) Wilkins. She married Tim Murphy on February 28, 1976 in Sparland. They made their home and raised their family in Chillicothe.

Surviving are her husband, Tim; her son, Adam (Rachel) Murphy of Washington, IL; her daughter, Katelyn (Justin) Schoch of Chillicothe; her step-daughter, Amy (Earnest) Robinson; four grandchildren, Noah, Leah, Ally and Carly; three step-grandchildren, Owen, Murphy, and Ella. Also surviving are her mother; three sisters, Debbie Holmstrom and Darnell Wilkins both of Chillicothe and Denise (John) Smith of Lacon; her sister-in-law, Tammy (Mike) Stumbaugh; her brother-in-law, Mike Murphy; and many nieces and nephews. Preceding her in death are her father; her sister, Darcy; and both her paternal and maternal grandparents.

Diane held a few jobs in the area working at the Lacon Seal Company, Blarney Castle in Rome and as a cook in the Chillicothe School District 321. Diane was a dreamer at heart; she had an eye for decorating and was well-known for her holiday candy making of turtles, caramels and toffee.

Diane was a wonderful wife, mother and grandmother, daughter and sister. Family meant everything to her and she cherished time spent with them.

Cremation rites will be accorded and a private burial of ashes will be held at a later date. Arrangements are under the care of Weber-Hurd Funeral Home in Chillicothe.

To send flowers to the family or plant a tree in memory of Diane Murphy, please visit our floral store.

To send flowers to the family in memory of Diane Murphy, please visit our flower store.