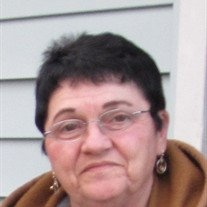 Delores L. Knapp, age 69, of Chillicothe, passed away on Tuesday, April 2, 2019. Delores was born on July 1, 1949 in Monticello, KY to Lucius and Mary (Burks) Humble.  She married Rene M. Knapp on January 11, 1975 in Jamestown, KY.  He preceded her in death on January 28, 2017.  Also preceding her in death are her parents, Lucius Humble and Mary (Paul) Dodson; and her step-son, Derek Knapp. Surviving are her son, Jason (Jayme) Knapp of Peoria, IL; two step-daughters, Talley (David) Gentry of Bloomington, IL and Rhonda (Tim) Regan of Aurora, IL; and nine grandchildren, Ryan, Chelsea, Gage, Kelsey, Jake, Nolan, Sidney, Dominic and Morgan. Delores worked for Caterpillar and later for Casey's General Store for 20 years.  She was a Union activist and she enjoyed riding motorcycles and gardening.  Delores also enjoyed spending time with her family and friends, especially her grandchildren, who she loved dearly. Cremation rites will be accorded and a memorial service will be held on Saturday, April 13, 2019 at 11am at Weber-Hurd Funeral Home in Chillicothe.  Visitation will be held one hour prior to the service.  Burial of ashes for Rene and Delores will be at Chillicothe City Cemetery.  Memorials may be made to the Central Illinois Chapter of the Alzheimer's Assoication.

To send flowers to the family or plant a tree in memory of Delores Knapp, please visit our floral store.

To send flowers to the family in memory of Delores Knapp, please visit our flower store.