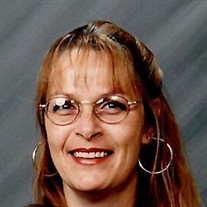 CHILLICOTHE- Deborah S. "Debbie" Pfeiffer, 62, of Chillicothe, passed away on Sunday, March 11, 2018 in Morton. She was born on October 18, 1955 in Peoria, the daughter of Edward C. Braasch, Jr. and Patsy (Williams) Braasch. She married Danny Hood in 1973 and later married Gary Pfeiffer. Surviving are: three children, Desirae (Joshua) Smick, Nathan Hood, and Richard (Caren) Pfeiffer, all of Chillicothe; seven grandchildren, Garrett and Kaylee Smick of Chillicothe, Madaleyna Hood of Chillicothe, Carter Lane and Macayla Hood of Pekin, and Rylee Sandy and Dylan Pfeiffer, both of Chillicothe; and four siblings, Natalie Smith, Sheryl Aeschliman, Edward "Charlie" Braasch III, and Julia (Steve) Evans, all of Chillicothe. Debbie was preceded in death by her parents and two brothers-in-law, Harvey Smith and Brad Aeschliman. She was a 1973 graduate of IVC High School in Chillicothe, having worked at many local establishments over the years. She had a life-long love of music and Harley-Davidson motorcycles. A funeral will be held for Debbie at 11:00am on Friday, March 16, 2018 at Weber-Hurd Funeral Home in Chillicothe. Visitation will be held the evening prior, on Thursday, March 15, 2018 from 4:00-7:00pm. Debbie's online memorial may be viewed at www.weberhurdfuneralhome.com.

To send flowers to the family or plant a tree in memory of Deborah Pfeiffer, please visit our floral store.

To send flowers to the family in memory of Deborah Pfeiffer, please visit our flower store.