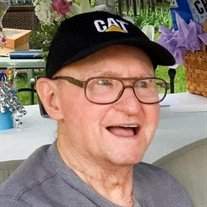 Daniel was born on June 8, 1937 in Princeton, Illinois to Edward Michael and Catherine (Faley) Donnelly. He married Isabelle W. Maynard on June 18, 1960 at St. Edward Catholic Church in Chillicothe.

Daniel served in the U.S. Navy. He was a barber and owned his own barbershop in Mossville. He then worked for Caterpillar for over 30 years, retiring in 1991. Daniel was a member of St. Edward Catholic Church, the Knights of Columbus and volunteered with the Optimist Club. Family was very important to Daniel and he was always helping others. He also enjoyed walking and cycling.

A Funeral Mass will be held on Friday, March 26, 2021 at 11am at St. Edward Catholic Church in Chillicothe with Father Matthew Deptula officiating. Visitation will be held on Thursday, March 25, 2021 from 4pm to 6pm at Weber-Hurd Funeral Home in Chillicothe with recitation of the Rosary at 6pm. Cremation rites will be accorded following the services and burial of his ashes will be at St. Mary's Cemetery in Ohio, IL at a later date. Memorials may be made to Community Needs Agency in Chillicothe.


To send flowers to the family or plant a tree in memory of Daniel J. Donnelly, please visit our floral store.

To send flowers to the family in memory of Daniel Donnelly, please visit our flower store.