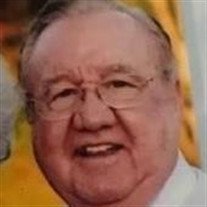 Dale E. Pope, age 86, of Chillicothe, passed away on Thursday, October 1, 2020 at his home.
Dale was born on November 26, 1933 in Nokomis, IL to Warren and Gladys (Nussman) Pope. He married Lucille Costa on December 29, 1956 in Nokomis. She preceded him in death on December 10, 2015. Also preceding him in death are his parents, two brother-in-laws and one sister-in-law.
Surviving are his sons, David (Mary) Pope of Pekin, Daniel (Helen) Pope of Chillicothe and Steven (Rose) Pope of Chillicothe; four grandchildren, Brandon Pope, Mollie Julius, Ben Pope and Bryan Pope and one great-grandchild, Henry Julius. Also surviving are his siblings, Catherine Dissler of Glen Carbon, IL, John Donald Pope of Florissant, MO, Linda (George) Virgil of Decatur, IL, Audrey (Bill) Moore of Springfield, IL and Beverly (Weldon) Stevenson of E. Alton, IL; and many nieces and nephews.
Dale served in the U.S. Navy from 1951 to 1955 and he worked as a test engineer for Caterpillar for 40 years when he retired in 1991. He was a member of St. Edward Catholic Church and the Peoria RC Modelers. He enjoyed woodworking, gardening and was an avid Ham Radio operator in his earlier years.
Cremation rites will be accorded and a Memorial Mass will be held at 11am on Saturday, October 10, 2020 at St. Edward Catholic Church in Chillicothe. Visitation will be held one hour prior to Mass at the church. Father Matthew Deptula will be officiating. Social distancing and wearing of face coverings requested. Burial of ashes with military honors will be at Chillicothe City Cemetery following Mass. Memorials may be made to St. Edward Catholic Church or to the charity of the donor's choice. Arrangements are under the care of Weber-Hurd Funeral Home in Chillicothe. Online condolences may be made through www.hurdfamilyfunerals.com


To send flowers to the family or plant a tree in memory of Dale E. Pope, please visit our floral store.

To send flowers to the family in memory of Dale Pope, please visit our flower store.