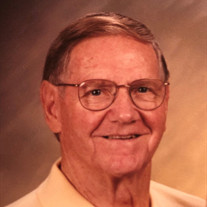 Dale E. Lober, age 93, a well-loved teacher and coach of Chillicothe, passed away on Friday, March 1, 2019 surrounded by his family. Dale was born on January 19, 1926 in Cissna Park, IL to Edward and Rosella (Roll) Lober.  He married Geraldine Northrup on August 9, 1952 in Chillicothe.  Surviving are his wife, Geraldine; his daughters, Lisa (Michael) Kemmer of Washington, IL, Connie Lober of Chillicothe, IL and Trish Lober of Antioch, TN; three grandchildren, Kirsten Burrow of Washington, IL, Kristopher (Emily) Kemmer of Henderson, NV and Kassidy (Darren) Cherrington of Davis Junction, IL; and his eight great-grandchildren.  Also surviving is his brother, Arlyn (Maureen) Lober of Springfield, IL.  He was preceded in death by his parents and one granddaughter. Dale was a Physical Education and Driver's Education teacher for Chillicothe High School and Illinois Valley Central High School as well as the baseball and basketball coach and Athletic Director.  He retired from teaching and coaching in 1983.  During his retirement he was in advertising and sales for the East Peoria Chamber of Commerce and for Chuck Rolinski in Toluca, IL.  Dale was a U.S. Navy World War II Veteran.  He was a member of Grace Presbyterian Church in Peoria and a member of the American Legion Post 9 for over 70 years.  He was a member of the Illinois High School Baseball Association and was inducted into the IHSA Baseball Coach Hall of Fame.  He was also a lifelong Cubs fan.  Dale will be greatly missed by his family and friends as well as the many lives he touched. The family would like to thank the staff of Transitions Hospice and Heritage Manor for the loving care shown to Dale. A service will be held Wednesday, March 6, 2019 at noon at Weber-Hurd Funeral Home in Chillicothe.  A private burial will be at Chillicothe City Cemetery immediately following.  Memorials may be made to the Fellowship of Christian Athletes.

To send flowers to the family or plant a tree in memory of Dale E. Lober, please visit our floral store.

To send flowers to the family in memory of Dale Lober, please visit our flower store.