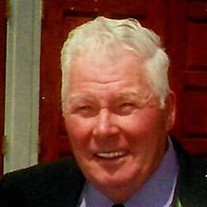 Clifford Shirley Gill, 83, of Edelstein passed away on Monday, December 18, 2017 at his home. Clifford was born on January 7, 1934 in Chillicothe to Harold and Mildred (Shirley) Gill. He married LaVeta Fae Johnson on August 31, 1952 in La Prairie. She survives. Also surviving are: one son, Timothy (Jennifer) Gill of Edelstein; three daughters, Janet (John) Newell of Arizona, Julie (Robert) Koch of Chillicothe, and Jeanine (Joseph) Shryock of Edelstein; thirteen grandchildren, Heather, Greg (Vanz), Jeff (Towana), Susanna (Chris), Deanna (Russ), Krista (Nathan), Robert (Kristi), Brian (Mary), Jamie (Jim), Wyatt, Ivy, Quincy, and Ben; eighteen great-grandchildren; one sister, Donna Davis of Chillicothe; two brothers, Robert (Maryellen) Gill of Denver, CO and Stephen (Luree) Gill of Decatur; and numerous nieces and nephews. Clifford's greatest joy was his wife and family. He was preceded in death by his parents and one grandson, Brent Shryock. Clifford was a farmer in Washburn and the Edelstein area, he also worked at LTV-Steel, Caterpillar, and SWCD of Peoria County. He was a lifetime member of Blue Ridge United Methodist Church and belonged to George Washington Masonic Lodge #222 in Chillicothe. The family would like to thank the hospice team for their wonderful care and compassion for Clifford as well as his many doctors. A funeral will be held for Clifford at 11:00am on Friday, December 22, 2017 at Weber-Hurd Funeral Home in Chillicothe. Visitation will be held the evening prior, Thursday, December 21, 2017 from 5:00-7:00pm at the funeral home, as well as one hour prior to the funeral. Burial will be at Blue Ridge Cemetery in Edelstein. Memorials may be made to Blue Ridge UMC or the American Heart Association. Clifford's online memorial tribute may be viewed at www.weberhurdfuneralhome.com.

To send flowers to the family or plant a tree in memory of Clifford Gill, please visit our floral store.

To send flowers to the family in memory of Clifford Gill, please visit our flower store.